↓ Skip to Main Content
Home › book tour › The #GargoyleAddiction tour is now over :)

The #GargoyleAddiction tour is now over :) 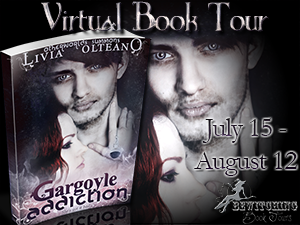 It’s been a great month, and I’ve had lots of fun with the Gargoyle Addiction tour. Yesterday’s interview stop over at Pembroke Sinclair’s blog marked the end of this tour. It’s been a blast, and I wanna thank you all for following Gargoyle Addiction as it spamificated the blogosphere 😀
The giveaway winners will show up in the widget and will be contacted as soon as I have the names. I wanna thank Roxanne for doing an awesome job, as usual, with organizing this awesome tour. She might have made a tours-junkie out of me, lol.

Also, today I’m contacting the giveaways winners of the blitz that ended in late July, so if you’re one of the winners, expect to hear from me 🙂

I have to say I’ve grown quite used to having a book on tour and now, since I expect a while of not touring until September (which is like 2 weeks away, yes, I know, you’re tempted to roll your eyes, lol!), I’ll be retreating into my “Writer’s Bubble” more commonly known as the writer’s cave. The nasty heat has grown into a more acceptable temp these last couple of days, so I think I can finally write. I can’t write when it’s too hot and I can’t sleep when I’m cold, but it works okay the other way around of course. Which is why I hate summer, heat paralyzes me. Maybe it’s the universe’s way of telling me I need to move to Alaska or Siberia or something. I bet I’d do zounds of writing if I lived in Siberia…hmmm.

But anyway, the fun of submissions begins once again. The NA Steampunk project that has all kinds of elements is out on submission. I can look forward to a couple of months of waiting to hear on that, which again should be conducive to me writing. I suck at waiting, I tend to OCD about doing things so I don’t feel like I’m waiting, which I am going to be doing anyway whatever I tell myself or keep busy with. Waiting sucks, totally. On the upside though, while you’re waiting you’re also half-optimistic about maybe getting a “yes” on the submission, so there is that. I have a love/hate relationship with submissions because of the waiting part. The actual submitting part of it I must confess I like, the details, the instructions, the rigor of it… yes, I am a nut for rules and obeying them. I’m not sure if I’m a lonesome sub or a closet Dom, just in case you’re wondering right now, lol. Maybe a bit of both, which is my general choice when it comes to either or. Meh.

I longed to rant a little, obviously. There’s a special beauty to ranting, don’t you think? 😀 Hopefully I’ll be back soon with some good news, on any front.